Posted on by italkisrael — No Comments ↓

The rock-throwers and their relatives are personalized through the use of their names and individual stories. But all the Jews in the article are anonymous settlers or soldiers. 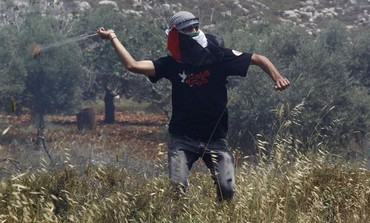 Palestinian uses sling to throw rocks at IDF near Deir Jarir in the West Bank, May 17, 2013. Photo: REUTERS/Mohamad Torokman
Among the hundreds of mostly pro-Palestinian sympathizers with whom I speak each year in Efrat I have taken note of a recurring sentiment that I find very disturbing. Most recently it was expressed by a student who was part of a delegation from a Midwestern Christian college that had come to Efrat for a short, token stopover in an “illegal Israeli settlement.”After spending four full days in Bethlehem, the group’s hour plus in Efrat was disingenuously described to me as an effort to “understand both sides of the conflict.”For this student, as for all of the people with whom I meet in this context, be their worldview religious or secular, an expressed concern for social justice is the motivation behind their visit to the area.

That is why I was troubled by the response of this student when I mentioned the brazen statement made by Palestinian Authority President Mahmoud Abbas at a recent press conference in Cairo.

For those who are unaware of this incident, Abbas told a mostly Egyptian press corps, at around the same time that preliminary peace discussions between Israel and the Palestinians were getting under way in Washington, DC, that no Israeli, neither soldier nor civilian, would ever be “present” in Palestine.

The student said something along the lines of, “Maybe this is their response to being treated so badly.”

It was not a query. Her tone belied her pretense of objectivity; she was being protective. She was, in fact, suggesting a rationale, an apology, an excuse, even a form of a justification.

As unseemly and counterproductive as Abbas’s statement sounded to Israelis, as well as to anyone else hoping for an authentic and final resolution to the Israeli-Palestinian conflict, it appears that this student found it acceptable.

I have encountered this attitude before in my meetings with selfdefined social justice groups that come to tour the Palestinian Authority. It emanates from a black/white political template in which Israel is the oppressor overlord and the Palestinians are the oppressed underdog. To suggest anything other to them is futile.

Using this template the underdog is relieved of most of the moral and social responsibilities of other civilized groups. Of course, this is never stated, but it is implied in the absence of unequivocal and public condemnation by human rights groups of even the most egregious defamatory and inflammatory words and acts of violence that emanate from Palestinian society.

Such was the attitude reflected in an August 4 New York Times article by the newspaper’s Jerusalem-based correspondent Jodi Rudoren. The article, titled “In a West Bank Culture of Conflict, Boys Wield the Weapon at Hand,” conveyed a tacit understanding of the potentially lethal activity of young Palestinians who regularly engage in stone throwing at Jewish vehicles traveling on roads passing their towns and villages.

Rudoren gives voice to a number of Palestinians from the West Bank village of Beit Umar, located between Jerusalem and Hebron, who either engage in rock throwing or who have family members that have been arrested, sometimes multiple times, for doing so. In the article, the rock-throwers and their relatives are personalized through the use of their names and individual stories.

But all the Jews to whom she refers in the article are anonymous settlers or soldiers. While it is not the responsibility of a journalist to either praise or condemn the activities of a news story’s actors, a reporter can, via tone and vocabulary, indicate which side in a dispute he or she personally favors.

Clearly, the author of this article empathizes with the rock-throwers, their parents and their community.

Reading Rudoren, one would think that the rock-throwers’ intent to injure, maim or kill Jews plays no role in their activity. “They throw because there is little else to do in Beit Umar – no pool or cinema, no music lessons after school, no parttime jobs other than peddling produce along the road. They do it because their brothers and fathers did.” Rudoren tells her readers that for young Palestinian males “rock throwing is a rite of passage and an honored act of defiance.”

By the end of Rudoren’s article the true victims of rock throwing appear to be the young Palestinians who are arrested by needlessly aggressive Israeli security forces for engaging in nothing more than a time-honored local hobby.

W h e n meeting with internationals, it is I, not they, that raises the issue of suicide bombers.

The subject enters our dialogue only because I mention it as the reason that Israel constructed the national security barrier, exclusively referred to by these groups as “the Wall.”

The Wall has achieved iconic status among these visitors; it represents all that they see as evil and anti-humanist in Israel’s occupation of the West Bank. To these groups the wall stands for apartheid, land theft, family separation and personal humiliation. When reminded that the barrier came only as a defensive response by Israel to the repeated Palestinian suicide bombings that took place during the second intifada resulting in 1,137 civilian murders and countless maiming and injuries, both physical and emotional, the typical response is silence.

At this point, I can sense the cognitive dissonance. To my discussion partners, the Palestinians are the victims, not the perpetrators. They are the oppressed, not the oppressors.

Thus, it is typical for one person in the group with which I am meeting to respond with some variation of the following statement: “Well, what do you expect? You have your tanks and jets, they only have their bodies!” With this statement, one that I have heard often, the cat is out of the bag: This person doesn’t “condone” terrorism, but can “understand” it and, in the case of Palestinians and Jews, when up against the wall (pun intended), can even justify it, at least in a closed conversation out of earshot of the press.

From words to rocks to suicide bombing.

I still consider myself politically liberal on many social issues.

But the same loss of moral compass that ultimately turned me off the New Left in America decades ago leaves me recoiling in horror from the “Invasion of the Body Snatchers” mentality displayed by too many of the social justice and church-based groups with whom I meet. Their relative silence or stated excuses throughout the past decade on the subject of open terrorist warfare conducted against Israeli civilians by ideologically driven and trained Palestinian Arabs is tantamount to standing on the sidelines and winking approval.

How do otherwise seemingly moral people come to this? Is it the outcome of misguided self-righteousness? Is it a sublimated expression of anti-Semitism, or when expressed by Jews, a form of selfhatred? Is it the result of blatant ignorance? Or is it the expected outcome of full identification with the Palestinian narrative? Sympathy is an important sentiment.

But when sympathy crosses the line, the results can be lethal.